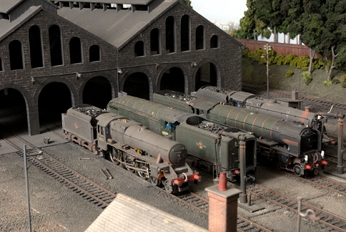 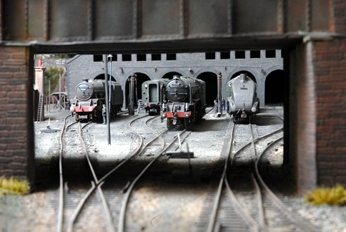 Annan Road is based on the former Glasgow and South Western Railway loco depot in Dumfries during the later days of steam on British Railways. The layout takes its name from the actual road in Dumfries that separated the loco shed from the turntable and coaling stage area.

The layout to the left of the road is dominated by the six track loco shed based on the characteristic “cathedral” style of the G&SWR. This design of loco shed in varying sizes was also used at several other locations such as Hurlford near Kilmarnock. The other building at the rear of the layout is a workshop where repairs would have carried out. 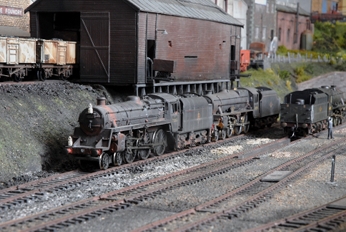 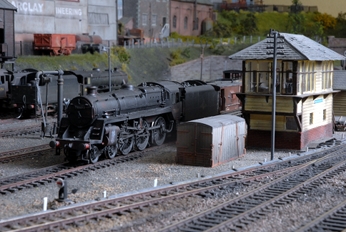 To the right of Annan Road on the layout are the coaling stage, ash pits and turntable. The timber coaling stage is again based on that at Dumfries but is also typical of many other locations on both the G&SWR and Caledonian Railway.

The operation of the layout centres on the loco depot so that, whilst an occasional train passes on the main line at the front, the main activity relates to the servicing of the engines in the depot area. Locos arriving from the main line visit each part of the depot as they are cleaned, turned, coaled and then stationed on shed ready for their next turn of duty. 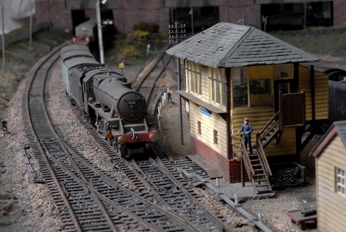 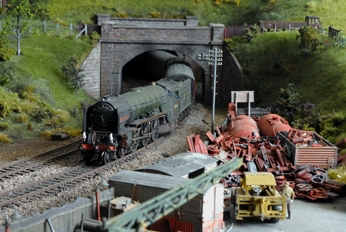 All locos and rolling stock seen on Annan Road are owned by the individual club members and feature ready-to-run, modified ready-to-run and kit built items. Steam traction predominates covering pre-grouping to BR Standard designs, although the new order of diesel traction can be seen creeping in. The majority of stock is prototypically weathered.

Annan Road is booked to appear at the following shows:

Annan Road has previously appeared at the following shows: