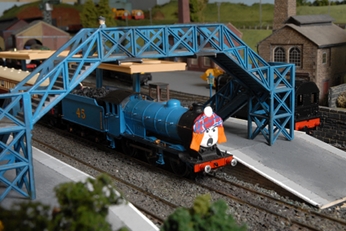 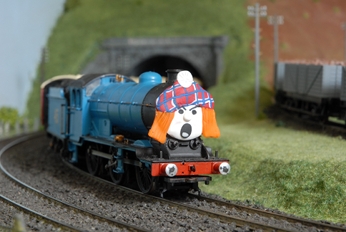 Star attraction is locomotive number 45 with the name “Wee Jimmy”. He dresses the part, with Wee Jimmy orange wig and tartan bonnet. He lives with his friends, some of whom are more famous than himself, in the roundhouse at Auchenshuggle and is regularly called upon to haul the trains from the main line station up the branchline to the quaint little station at Jimmy’s End. There his driver and mate enjoy a cuppa in the station café. Some of Wee Jimmy’s friends are smaller and less glamorous. They are put to use in the quarry, on local goods trains and in the beautifully crafted timber yard. 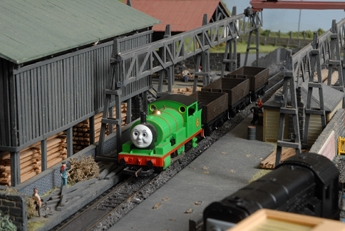 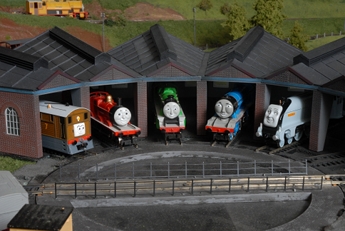 The idea for the layout originated at the club’s own show in Rutherglen Town Hall. The well known layout, Crawford Bridge was on show and for five minutes every hour the regular stock was replaced by Thomas characters. The delight on the childrens’ faces at seeing the well known characters in a real railway situation, convinced the club that a layout designed for children was the best way to promote interest in the hobby by the young generation.

With Wee Jimmy, the kids can not only see the characters in action but also operate the trains themselves by using controllers fitted to the public viewing side.

Wee Jimmy has now been sold. 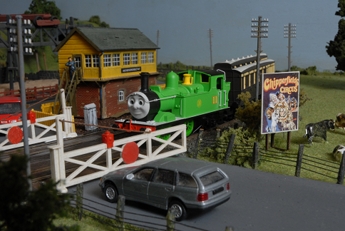 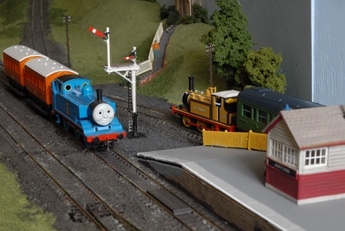 Wee Jimmy has previously appeared at the following shows: